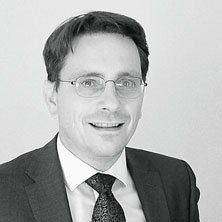 Hubertus v. Poschinger studied physics at the Ludwig-Maximilians-University in Munich. He completed his diploma thesis at the Chair for Photonics and Optoelectronics. During his physics studies, he worked as an analyst for a renowned venture capital company in Munich and, after completing his studies, worked for one year in the R&D department of BMW AG before beginning his training as a patent attorney at Grättinger & Partner at the beginning of 2004. He was admitted as a German Patent Attorney in 2007 and as a European Patent Attorney in 2008. He has been a partner in our firm since 2009.

In his leisure time he enjoys alpine skiing and scuba diving.